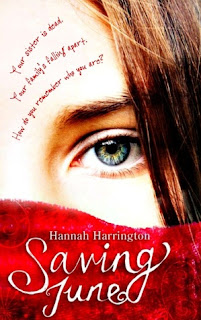 ‘If she’d waited less than two weeks, she’d be June who died in June. But I guess my sister didn’t consider that.’

Harper Scott’s older sister has always been the perfect one so when June takes her own life a week before her high school graduation, sixteen-year-old Harper is devastated. Everyone’s sorry, but no one can explain why.

When her divorcing parents decide to split her sister’s ashes into his-and-her urns, Harper takes matters into her own hands. She’ll steal the ashes and drive cross-country with her best friend, Laney, to the one place June always dreamed of going, California.

Enter Jake Tolan. He’s a boy with a bad attitude, a classic-rock obsession and nothing in common with Harper’s sister. But Jake had a connection with June, and when he insists on joining them, Harper’s just desperate enough to let him. With his alternately charming and infuriating demeanour and his belief that music can see you through anything, he might be exactly what she needs.

Except June wasn’t the only one hiding something. Jake’s keeping a secret that has the power to turn Harper’s life upside down again.

For me this book is all about relationships and many different forms they came in.

The first relationship this books tackles is that between Harper and her recently dead sister and looks at the regret Harper holds inside her for all the things she said and didn't say to her sister. I think it was a really poignant insight that anyone who has lost anyone can relate to easily.

I loved the relationship between Harper and her best friend Laney. I loved seeing how two girls who were so different could get on so well and I loved seeing the almost sisterly bond they had between them.

This closeness was contrasted with the relationship Harper had with her divorced parents. You could see the strains it had had on Harper especially as her mother was using her as a bit of emotional crutch which wasn't at all fair.

I loved the volatile and feisty and sometimes sexy relationship between Harper and Jake. I loved seeing how they interacted with one another and for me this was the driving thing about this book and the thing that kept me reading it. I enjoyed see how they sparked off one another.

A book that I enjoyed even though it didn't blow me away and an author I am keen to read more in the future.

The Insouciant Sophisticate said…
This book really caught me by surprise. I've read a lot of books where the older sister was dead or seriously sick and this one is a standout to me, probably because of the writing, humor, and the songs that are incorporated.
22 June 2012 at 04:19