June 28, 2012
The Golden Lily by Richelle Mead
Published by Razorbill 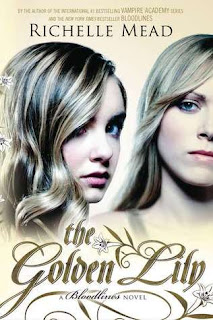 Tough, brainy alchemist Sydney Sage and doe-eyed Moroi princess Jill Dragomir are in hiding at a human boarding school in the sunny, glamorous world of Palm Springs, California. The students--children of the wealthy and powerful--carry on with their lives in blissful ignorance, while Sydney, Jill, Eddie, and Adrian must do everything in their power to keep their secret safe. But with forbidden romances, unexpected spirit bonds, and the threat of Strigoi moving ever closer, hiding the truth is harder than anyone thought.

Populated with new faces as well as familiar ones, Richelle Mead's breathtaking Bloodlines series explores all the friendship, romance, battles, and betrayals that made the #1 New York Times bestselling Vampire Academy series so addictive. In this second book, the drama is hotter, the romances are steamier, and the stakes are even higher.

This is less a review and more me throwing my feeling for this book out there. I was a huge fan of Vampire academy books and I have been keen to follow this series. I loved the first book but wasn't so much of a fan of this one.

For me the thing that kept me reading this book were the boys namely Adrian, Dmitri and Eddie. Just like in the previous series I love them all in their own different ways and couldn't get enough of them. I loved gettin to kow them yet again and seeing the world they live in.

I found however the book was really spoiled by Sydney. I don't remember disliking her in previous books but I really really did in this book. The main reason for this is her sheer aversion to food. My god the girl is a rake and she spends all the time worrying that she is fat and that a single calorie or sniff of sugar will make her fat. Not a brilliant role model for the teens who this book is aimed at. Equally her boyfriend (I say boyfriend I don't think that's the word for him) he absolutely the biggest freak out there. The girl dresses up and looks stunning and all he can say is 'that outfit isn't historically accurate'. What? quite honestly while I wouldn't put up with it I think they deserved each other. She also downright annoyed me at the end with the decision she made. I cannot believe how she decided to treat someone at the end of it all and it made me dislike her a lot.

So what I want to see in the next book

more of vampire's in next book please
warriors of light