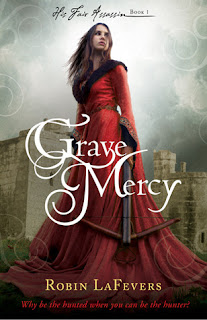 Young, beautiful and deadly. Trained as an assassin by the god of Death, Ismae is sent to the court of Brittany, where she finds herself under prepared - not only for the games of intrigue and treason, but for the impossible choices she must make. For how can she deliver Death’s vengeance upon a target who, against her will, has stolen her heart?

I was really excited about starting this book. I mean look at that cover and it's about assassin nuns? Way to draw me in!

I must admit that unfortunately this book was really for me. Don't get me wrong it wasn't bad but it really didn't draw me in as well as I though it would do.

The book started well. You meet Imae, the protagonist, as she escapes a life of brutality with the man she was forced to marry. It's pacey and exciting as she makes her escape and arrives at the convent where she'll spend the next few years of her life. However I felt as soon as Ismae got to the convent the pace of the story slowed right down and it was then when I found my attention waning.

One thing I did really enjoy about this book was the slow burning love story that was built up of the course of the book. If nothing else the reason why I want to read the next book is because of this element alone.

I really struggled with keeping tabs on who all the different characters were and I felt at time a bit crowded and I felt it got to the point where I didn't care who half these people were.

All in all not a bad read and I'm certainly interested to carry on with the series but I'm hoping that the next book is a bit faster paced and has a bit more going on to keep me interested throughout.

The Insouciant Sophisticate said…
I liked the slower pace since I feel that is more typical of historical-type stories but I know that doesn't work for everyone. I'm excited for the second book though-Sybella was great in the first book!
25 June 2012 at 15:20