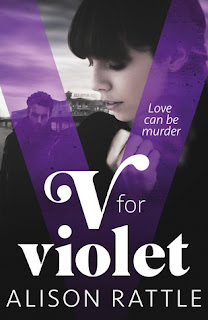 The teenage years are a time of massive change, both physically and mentally. It’s all about finding your place in the world and about finding yourself. Violet is a typical teenager and is confronting all the usual struggles and issues with family, friendships, first love and what to do with her life. But what makes things different for Violet is that she is doing all this in the early 1960s in a society that is itself struggling through massive changes and trying to find its own identity. What is happening within society is a reflection of everything Violet is going through. This is exactly why I chose the 1960s setting for V for Violet because it was such a fascinating and defining time in British history. And London in particular was at the centre of all the massive changes that were going on.

Violet was born at the exact moment Winston Churchill announced victory in Europe. So right on the cusp of the old and the new. She was part of the first generation not to experience war at first-hand. And by the early 1960s, she was part of the first generation of teenagers to be free from conscription. Suddenly, young people had the freedom and choices their parents could never have dreamed of. The world for these young people was full of hope and possibilities and excitement. A direct contrast to the lives of their parents who had lived through the war and lost sons, brothers and husbands and who were still struggling to recover. London itself had still not fully recovered. The physical evidence of the war could still be seen in the bomb sites on street corners and the demolished buildings and houses yet to be rebuilt. But rising out of the bleakness were new sounds in music, daring new fashions, a more liberal attitude towards sex and the feeling that life was exciting and was there to be grabbed and lived.  It was an intoxicating mix of the old and the new and Violet is caught in the middle of it all. Her parents are still grieving for a son they lost in the war, a brother Violet never knew and a hero she can never compete with, but whose photograph taunts her from the mantelpiece every day. Her best friend Jackie has embraced the new way of life and has found work in a factory where she is earning good money and has the freedom to spend it on new clothes and going out to dances. Violet is left behind working in her parents’ fish and chip shop. They are still stuck in the old ways and will not allow her to go out to work in a factory. They don’t understand this colourful, vibrant and daring new world. Violet is caught between the old and the new and is desperate to find her own way.

It’s when she meets Beau, one of the new breed of Rocker boys, that Violet’s drab little life begins to change and she finds the courage to embrace her individuality and to seek out all the new possibilities that post-war London has to offer.

I like to think the 1960s London setting V for Violet is a character in its own right and although the decade began all grey, restricted and uncertain, it grew into a time of huge optimism and excitement for a better future, mirroring Violet’s (and any other teenagers) own journeys into adulthood.

V for Violet by Alison Rattle is out now, published by Hot Key Books