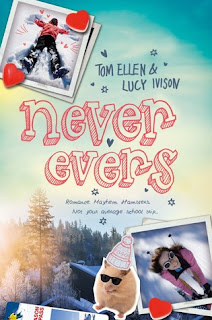 Kicked out of ballet academy and straight into a school ski trip, Mouse knows certain classmates can't wait to see her fall flat on her face. Meanwhile, Jack looks forward to danger and girls, but hasn't a clue about either. That's until French teen sensation Roland arrives in the resort - who Jack's a dead ringer for. When Roland persuades Jack to be his stand-in for a day, Jack, in disguise, declares his feelings for Mouse. But what happens when he's no longer a pop star - will it be music and magic on the slopes?

I have been looking forward to Never Evers for ages after adoring Lobsters last year. Having now read it I can happily say it was just as fab as I have hoped it would be.

Think of Never Evers as Lobsters younger sibling aimed at a slightly younger audience with characters aged 14 rather than the older teens featured in Lobsters. The narrative splits between Jack and Mouse and follows them as they attend a school trip skiing in France.

The story line is really funny and I loved seeing how things played out. What I thoughts was particularly clever is the misunderstandings between the girls and the boys which you can see as a reader seeing both but each side sees differently because they don't know the whole story.

Lots of funny. Lots of teen awkwardness. I loved it.