January 31, 2016
January has whizzed by in a blur of crappy weather and too much work. Here's what I got up to bookwise.

Book of the Month
Hard one to call because I've read lots of great books this month but if I had to pick I'd go with Love Song by Sophia Bennett. It is fabulous. 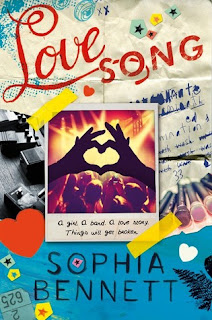 February's TBR pile
Salt to the Sea by Ruta Sepetya
The Girl from everywhere by Heidi Heilig
The Night Watch by Sarah Waters
Eleanor by Jason Gurley
At the Edge of the Orchard by Tracy  Chevalier
Look at me by Sarah Duguid
Strange Girls and Ordinary Women by Morgan McCarthy
I'd Tell you I'd love you but then I'd have to kill you by Ally Carter
Veronica Mars: The Thousand Dollar Tan line by Rob Thomas
The Secrets of Drearcliff Grange School by Kim Newman
Salem Falls by Jodie Picoult
Accidental Superstar by Marianne Levy
All the birds in the Sky by Charlie Jane Anders
Party Princess by Meg Cabot
Not if I see you first by Eric Lindstorm
Book of Lies by Terri Terry
Trigger Mortis by Anthony Horowitz
Six Four by  Hideo Yokoyama
Black Arts by Andrew Prentice

Kate @Midnight Book Girl said…
You had a great reading month! I really want to read Salt to the Sea too-- not sure it will happen next month though!
31 January 2016 at 15:27