August 09, 2015
I am very pleased to have Claire McFall on the blog today to coincide with the release of her new book Black Cairn Point 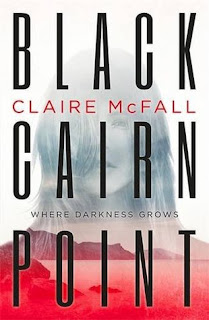 Most writers have the same dream: they’ll write an incredible novel, a publisher will snap it up and transform it into a real, live ink and pages book… and it’ll sell millions of copies and be widely praised (said writer will then make bundles and bundles of money, but of course that’s not why they’re doing it…).

Most people who know me wouldn’t believe this, but I’m actually quite shy and insecure. No, really.  OK, in room full of strangers I’ll likely be the first one to speak and break the ice… but give me a compliment and I’ll do one of two things: deny it and say something derogatory about myself, or burst into flames of embarrassment. So the thought of going out there and saying “hey, here’s my book.  It’s awesome, you should read it” kind of makes me want to crawl into a tiny dark hole and hide there forever.

Alas, such actions don’t sell books. There are two main avenues available to connect with your audience: social media and the internet (hi!), and face to face author talks.  Both are great mediums of communication… and both have the fear factor for the first time (and, ahem, third time) author.

The internet is amazing.  Seriously, it is.  Back when I was at school, we had ONE computer hooked up to the internet, and there were no firewalls (to stop naughty boys googling “boobies”) so the scary librarian had to stand behind you and watch every site you logged on to in order to make sure you didn’t see anything you shouldn’t (like, say, boobies).  If you needed to find out a fact, nine times out of ten you had to look it up in an encyclopaedia or reference book, which was tedious.  And keeping in touch with a pal who lived far away (i.e. outside of your village)? You had to write a letter! In promotional terms, sites like Facebook and Twitter are incredible because they open you up to a huge audience you could never hope to individually connect with otherwise and, much more importantly, it means that readers can connect with you! Nothing makes my day like someone e-mailing, Facebook posting or Tweeting (not, I have learned, Twittering) and saying they enjoyed one of my books.
But oh, man, is the internet scary.  I have a website (www.clairemcfall.co.uk).  Building it was hard.  You have to buy a host name, then figure out how to create pages.  And then, when things change, like having a new book out, you have to relearn how to use the software because, to be honest, you weren’t really sure what you were doing in the first instance.

Then there’s Facebook and Twitter.  An author’s chance to chat one-on-one with readers.  But what if no one wants to chat with me?  What if I say something stupid?  What if someone comes on and tells me they don’t like my book???

Oh, and that’s the other scary thing about the ‘net – reviews don’t just appear in magazines and newspapers anymore.  Oh no, they're online.  And anyone can review you – to a potentially limitless audience.  Ridicule is just a Google search away...  I’ve been quite lucky in that most reviews have been really pretty positive, but everyone gets a bad review at some point.  And it’s crushing. You can’t say anything in response, either.  That’s pretty much the number one no-no.  You just have to grin and bear it… and try not to read it over and over again as you sob into your pillow (wine glass).
That’s okay, though: no one can see you.  Face to face promo events, not so much.

I have my own little author nightmare: I’m at a book signing, sat there in my good outfit (a skirt, no less) with my special silver pen, my little stamp and ink , and stacks and stacks of my books.  And not a soul in sight. Just me, a hopeful expression on my pathetic little face.

This has never actually happened to me, but I live in absolute fear of it every single time. I won’t even have birthday parties, you know, just in case.  At the Edinburgh Festival, I was convinced that there would be no one there, just a sea of empty benches… right up until the organiser told me it was sold out (don’t be too impressed, it was a small tent). Then, of course, there’s the live factor.  Online, you can write things in advance (like this!) or at least take a moment (I really should do this more often) to think before you post a Tweet. When you’re talking to people at an event, you have to react fast.  Last year, I was at a festival doing a talk with another author and the floor was thrown open for discussion.  The first question was for her and it was an absolute stinker! All I can remember is thinking Oh thank God it’s her, I’d have no idea what to say!

Then, of course, there’s the potential for public humiliation.  I’ll give you an example: I did a talk at a school in Edinburgh where I was given a (big) bottle of water – because talking is thirsty work – and a clicker for the PowerPoint.  I won’t bore you with the full, hideously mortifying version, but I managed to completely smash the clicker whilst at the same time knocking two litres of water all over the carpeted floor, causing three rows of girls to have to hike their feet and hold their bags up in the air for the entire talk.  I then had to speak for thirty more minutes when what I really wanted to do was, well, die.

But, you know, what doesn’t kill you makes you stronger.  I didn’t die. I sold some books, and I was definitely memorable. Now I look back at it and laugh (into my wine glass). As I gear myself up to promote Black Cairn Point – oh hey, yeah.  I have a new book out!  You should read it! – I’m sure there will be many more.

Now, when do I get my millions of sales, world-wide acclaim and bundles and bundles of money…?
Thank you so much to Kirsty @ Overflowinglibrary for allowing me to take over her blog with my ramblings for the day! Cxxx