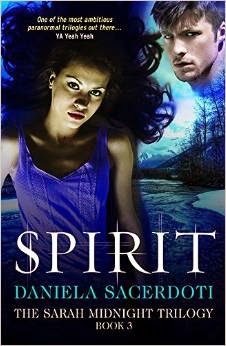 Throughout the trilogy, the action moves around a lot – I think it’s pretty clear that I love travelling and I’m very curious about faraway places

We start off in Edinburgh, on the east coast of Scotland. Edinburgh is a very dark, atmospheric place that has been called ‘the dream of a poet or a serial killer’. Perfect for Sarah, I thought! In particular I always saw Nicholas fitting in there very well there. The scene where he walks down the Royal Mile on a winter’s night is one of my personal favourites.

Meanwhile, Elodie is in Castelmonte, which is really another name for Caravino, my home village in the north of Italy, and a place I know inside out. It was lovely for me to be able to paint a picture of the mountains and the vineyards and the glacier streams – and not least mention some of the local delicacies!

Niall and Mike are on Grand Isle in Louisiana – I’ve never been there, so what I describe of the place I found out through research. It’s a fascinating place, with its meeting of cultures and remarkable, natural landscape. I was saddened to find out, while I researched for my Louisiana scenes, that so much of its coast was spoiled by the big oil spill a few years ago. This has been disastrous for both animals and human communities and it broke my heart…

Another location I use is Japan, though it’s only mentioned in passing because Sean, Harry, Elodie and Sean’s former girlfriend (Mary Ann) used to hunt there on behalf of the Ayanami family. Of their time in Japan, I mention the Tokyo metro being invaded by Taizu spirits – this is the subject matter of a short story that I hope to release in one form or another at some point. Japan is a dream destination of mine and I hope I’ll get to visit it sooner or later.

The second book, Tide, is set on Islay, an island in the Hebrides on the west coast of Scotland. I’ve never been to Islay, but it fascinated me because of its incredible landscape, and I thought it reflected Sarah’s looks and personality well. The Midnight family on its paternal side comes from Islay, where the Midnight mansion stands. I’ve been lucky enough to be invited to the Islay Book Festival this year, so I’ll finally get to see my favourite location.

In Spirit, the scene opens in Venice, where I’ve been many times but I’m still not used to its beauty and dreaminess. Venice was perfect for the mysterious Vendramin family, who reside in a palazzo on the Grand Canal. We also catch a glimpse of the Tuscan hills, where Micol hails from.

The entrance to the shadow world is in Poland, in the Bialowieza forest, the most ancient forest in Europe. Poland has been in my heart since I visited many years ago, at the age of fifteen. It was so full of culture and history, and the people were friendly and open – for many years I corresponded with a Polish girl called Martyna, whose name I’ve used for Nicholas’ fiancée.

Finally, the most spectacular of locations: the Shadow World, the parallel world where demons reside. This is our world, but the way it used to be millions of years ago, frozen in time. It’s a place of terrible beauty and danger, covered in thick forest and populated with fearsome predators. I particularly loved describing its sky, which I imagined perfectly limpid and full of stars, because there are no human sources of light there.
I hope my readers will enjoy travelling with Sarah through Europe and beyond . . . I certainly had a lot of fun doing so!