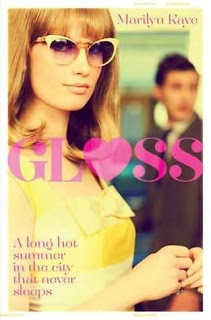 I’ve been writing books for young people for 30 years, and people have frequently asked me, “do you have teenagers,” or “do you work with teenagers?”  When I reply “no” to both questions, they’re surprised, and they want to know how I can write for and about teens when I’m not around them on a daily basis.  I reply, “because I was a teen.”  I believe that teens today face the same problems I faced: a concern for how we look, how are bodies are changing, how we care about what others think.  Rebellion, peer pressure, sexuality, identity – these are all concerns of teens, today, yesterday, forever.
But I have to admit, there are differences between the world I lived in as a teen, and the world the teen today faces.  And that was my inspiration for writing Gloss – to show teens today that the teens of my time faced the same predicaments, but in a different world.
Different how?  Well, for one thing, in terms of technology.  We didn’t have mobile phones or even answering machines for our phones at home.  So if you were hoping a certain guy might call and ask you out, you stayed home and by the phone, yelling at your parents or siblings if they kept the line busy.  If you had a favorite TV program, you had to be home at the time it was broadcast – you couldn’t tape it to watch later.  We didn’t have personal computers – if you had to get information, you went to the library.
We didn’t use birth control pills, and abortion was illegal.  So we were a lot more hesitant about becoming intimate with our boyfriends – the potential consequences were huge.  Girls were expected to be virgins when they married, and marriage was the goal.  In doing research for Gloss, I obtained copies of magazines that were popular at the time.  I’d read these same magazines when I was 15, but I’d forgotten about all the ads for the silverware and china patterns you’d want when you got engaged.  Even at the age of 15, you were supposed to be thinking about these things!
Marriage was important because there weren’t that many other options for girls.  There were careers like teaching or nursing that were considered acceptable, but a fortunate girl only engaged in these activities until she could get married, become a housewife and raise children.
Some people think life was simpler for girls then.  There were rules that were accepted and followed.  For example, nice girls didn’t go “all the way”, and nice boys didn’t expect them to.  But that doesn’t mean we didn’t have the same needs, the same desires that girls have today – so maybe it wasn’t all that simple.
In writing Gloss, I wanted to write about four ordinary girls who have the same feelings, the same concerns, the same joys as girls today, but who live in a time when the “rules” were different.  I hope readers today will identify with them, and see how circumstances can influence their decisions.
I hope I succeeded.  I hope you’ll let me know if I did.