April 06, 2013
My name is Fi from Bookish Outsider and I'm a bookaholic! It's only natural I suppose when you grow up in a house full of books, both of your parents were big readers, you study English Literature and work in numerous bookshops! These pictures will prove that when it comes to books I have slight hoarding tendencies, once I buy a book I'm unable to be parted from it except for the very rare occasion when I really didn't like something. 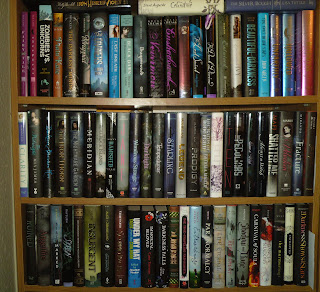 This first picture is most of my YA hardbacks. I used to buy mainly paperbacks but I got tired of waiting months after the hardback was published so my obsession with those beautiful smaller sized hardcovers started! There's a great mix of authors here, from Kelly Creagh to John Green to Marie Lu as I tend to jump around from genre to genre. 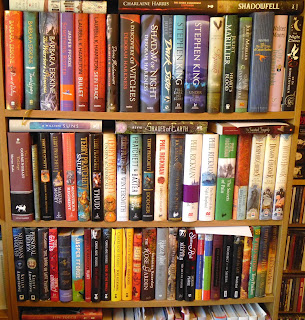 The second picture is a small sample of my adult hardbacks, mainly authors that are autobuy for me such as Stephen King, Phil Rickman, Terry Pratchett and Juliet Marrillier. The only problem with not having all your books in the same place is that it looks like I have lots of incomplete series - I don't! They just don't all fit.

The third picture is the shelf above my desk and as well as all the books pictured there are normally stacks of picture books for my niece & nephew along with any new books I get before they are sorted, catalogued and photographed. I can be a bit obsessive with anything vaguely bookish... On this shelf there's more YA, along with various classics, fantasy and fairy tales which are mostly what I tend to read.


The next two pictures are both from my bedroom and up until Sunday were perfectly organised by author and title. However, after putting my new bookcase together they're all messed up so I've got hours of fun sorting and an empty bookcase to fill! 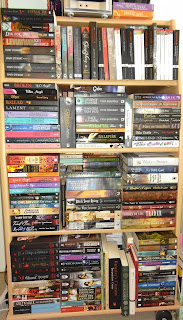 This bookcase is stacked three deep with books but I know exactly what books are on there thanks to an ingenious filing system! My nearly complete collection of Charles de Lint books are on here along with the Morganville Vampire books (including the first three published in this country that had the glow-in-the-dark covers!) and more fantasy & classics with a bit of horror thrown in. 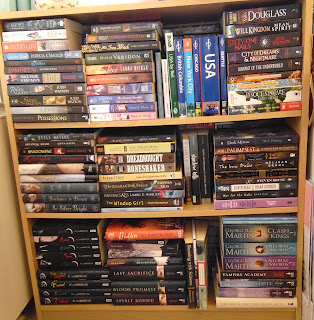 This bookcase has lots of assorted genres on it, including the travel books for the US and Canada for the cross-country trip a friend & I are planning and is also stacked two deep to help with the storage problem! 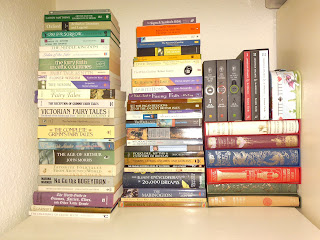 The last picture is of my research books in my writing corner. I've been writing a series of fantasy/dark fairy-tale books since I was a teenager and these are just some of the books I've picked up along the way to use for research. Also on here are my Folio Society fairy-tale books, my box-sets of Lord Of The Rings and Jonathan Strange & Mr Norrell and my Alice In Wonderland espresso cups.