Blog Tour: By any other name by Laura Jarratt (Q&A with Holly and Joe) 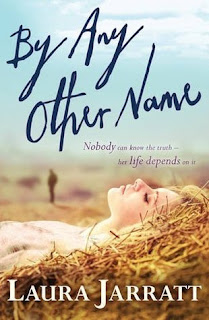 Holly: In general, very, I think. But obviously you can get it really, really wrong. It came as quite a big surprise to me that you can find a boy attractive for a while but actually a bit further down the line, there’s just nothing there. Not even like it fizzles out – just that you were wrong and there wasn’t anything to start off with.

Joe: Don’t know, to be honest. I would have said very important but like Holly says, you can get it wrong. I suppose you should take your time to get to know someone and not leap to conclusions too quickly.

Holly: You know, ‘village’ has sort of grown on me. There are good things and bad things about it. I still don’t like that part where everyone is into everyone else’s business, or how petty some of the people in school are. But people smile at each other in the street. When you go to the shop, you pretty much always see someone you know, and that’s okay. But I miss the city too – especially the shops. Best thing, I think – live close enough to a big city so you can just get on the train and escape whenever you want.

Joe: Village! I couldn’t do with being caged in by concrete and steel.
(He shudders.)

Holly: It is very pretty too. I forgot that part. I think I’d miss that now…Joe would probably miss the cows! I swear his entire family is obsessed by them.

Joe: Holly is really judgemental. She likes to classify people in her head and box them off in little compartments. Like a kind of mental OCD – she has to be able to attach labels to people.

Holly: That is not true!

Joe: (laughing) It is! You have got better. You’re not as snobby about it now but you still do it, even if it’s nice labels.

Holly: (glaring) He’s moody. And if he’s in a sulk, he blows up easily.

Holly: (glaring even harder) Also he likes winding people up!

Joe: She’s a fighter. Never takes anything lying down.

5.      You can tell a lot about a person from their favourite cake. What’s yours?

Holly: Ooh, well, I like chocolate – who doesn’t? And carrot cake can be amazing but sometimes it’s very disappointing too depending on where you get it. And coffee and walnut is like that too – can be sickly if there’s too much coffee buttercream. So actually in the end I think fruit cake because even bad fruit cake is good whereas if the others are bad they are a bit puke-inducing.

Holly: You need to understand he is like a human hoover. Food appears and he practically inhales it.

Joe: I like that stuff from the bakery that Katie is into. That’s extra good. What’s it called?

Holly: Battenburg. It’s her new thing. She likes sectioning out the yellow and pink squares to eat them separately. And peeling off the marzipan from round the outside.

Holly: He won’t tell you. He’ll do romantic stuff but he won’t ever talk about it to other people. Which is fair enough because if Matt found out, he would never, ever hear the last of it!

Joe, what’s the most romantic thing Holly’s ever done for you?

Joe: Covering for me on that question!