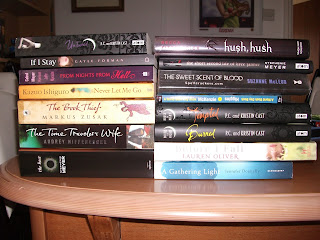 I love the idea of in my mailbox as a fab way to keep tabs on the books you have coming in and out over a week. These are the books that came into the house for me this week.

I have had quite an impressive week this week all in all on the book front thanks to the fantastic readitswapit.co.uk.

I am a little worried however that I may not get far through them before I have to stop reading altogether when exam marking season hits!

A pretty impressive haul from Amazon - I have been trying to swap hush hush for ages on readitswapit and finally gave up on it this week and brought it on Amazon. Beautiful edition - I have already read it and will review on here asap. I have had Bree Tanner on pre order for ages. I love the Twilight series (my wonderful husband brought me the first one years ago before it got big because he thought I looked like the girl on the cover - the same cover picture freaked me out!) Again another book I have already read during the week. The two house at night books were another example of me giving in after I couldn't get them on readitswapit. I have now read the first 3 books and got a bit over excited ordered these and pre ordered as far forward as I can. I reckon the next book I pick up will be the fourth one of these. The final three I ordered as a leaving present for my student - she has been a fab help at work and I am horrified that I am going to have to manage on my own now that her University course has finished. She is really into reading (although I think her tastes are a little more grown up than mine) and I though these three would be perfect.

a fab haul this week - I brought home a load of books from work that I'd been given a presents but never read and then taken in as I didn't have space at home for them and thought someone else would read them. Turns out they weren't keen either - put them on readitswapit and have swapped most of them already. As above I have been hooked on the house of night series so pleased to get one on here. I have been looking for if I stay for a while and finally got it this week. I have already read it during the week and it was a fab swap. Prom Nights from hell is one that my other half swapped for me. While I quietly excited because Stephenie Meyer has added to it I'm not entirely sure what to expect. Medusa Touch is one I won't read for a while - I recent read the first in the series and am led to believe that there are others that first into the series first before i love on to this. Before I fall arrived this morning. I am very excited about this one and am only putting off reading it as I think it might be similiar to If I stay and I don't want to read them too close together and confuse them. Finally a gathering light is a book that has been recommended to be by Amazon for ages now. the cover looks like Lake of Dead Languages which is what drew me in. No idea what to expect but looking forward to it all the same.

Both these books were given to me this week. The first by my husband's friend (and second poshest person I know) who got it in turn from our ex lodger who in turn was given it by his father who found it in the Royal Academy in London where he works. It has a postcard in it explaining it is like one of those book crossing books. No idea what to expect but have been told it refers to Cromer in it so I'll give it a go. Final one is one my husband picked up at the local library when they were having a clear out he saw it and thought I'd like it. I haven't even looked at the back but I'm sure I'll get to it soon enough.

The Book Hour said…
I liked Hush Hush too! Crescendo is almost pre-ordered (I'm not very organised!). I haven't read The Short Second Life of Bree Tanner yet, probably because romances are always at the top of my wishlists. Glad you liked it though - I'll try and read it soon! xx
13 June 2010 at 11:21

TheBookMogul said…
I loved Hush Hush it was my favourite book of last year! I hope you enjoy it, I got the new Meyer book but haven't read it yet. Hope you enjoy!
13 June 2010 at 12:08