In my mailbox (2) + review of Moth diaries 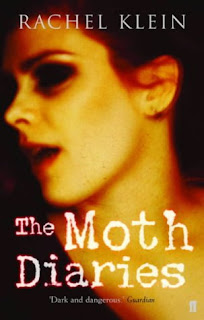 In my mailbox hosted by the story siren

Slow week this week on the book front. I am actually quite annoyed as i should have had a couple more books through from readitswapit.co.uk but two different people haven't bothered to post the books out grrr and as my birthday's coming up I don't want to buy anything (although I have been editing my amazon wishlist in anticipation with help from goodreads.com). The one and only book I did get this week was the Moth diaries which was compelling enough for me to read by the end of the week so I have also included a review as well.

Story description from Amazon.co.uk
At an exclusive girls' boarding school, a sixteen-year-old girl records her most intimate thoughts in a diary. The object of her obsession is her room-mate, Lucy Blake, and Lucy's friendship with their new and disturbing classmate. Ernessa is a mysterious presence with pale skin and hypnotic eyes. Around her swirl dark secrets and a series of ominous disasters. As fear spreads through the school, fantasy and reality mingle into a waking nightmare of gothic menace, fuelled by the lusts and fears of adolescence. And at the centre of the diary is the question that haunts all who read it: Is Ernessa really a vampire? Or is the narrator trapped in her own fevered imagination?


Not entirely sure what this book was actually about and a it worried that it was just too clever for my brain to comprehend. The main character was a bit of a moaner who spent a lot of time obsessing over the fact her friend had a new friend and didn't really seem bothered by things that should have upset her like people dying. That said it was quite compelling and I was keen to finish it. It might be the case that I simply need to think about it a bit more before I really get the point of it.

Kathy Martin said…
Don't you hate it when that happens! I prefer a story that I understand while I'm reading it. I don't have the patience for a book that isn't clear. I hope you get lots of books for your birthday. Happy reading! BTW, I am a new follower.
20 June 2010 at 16:02