June 21, 2017
Last August I was lucky enough to go along with my lovely blogging friend Lyndsey to Turtle Bay Norwich for their press preview event (see Lyndsey's write up here - I am pictured drinking cocktails!) and ever since then I've been very keen to go back. Luckily for me I was recently contacted when Turtle Bay were looking for people to review their summer menu and I jumped at the chance. I booked a table online using their booking system on their website for a Saturday lunchtime. Incidentally I was really impressed with their booking system. Super easy to use meaning you can book a table within minutes and they both confirm your booking by email and remind you of your booking on the day. 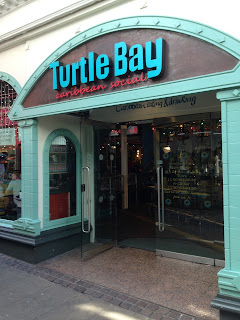 Turtle Bay Norwich is situated in the Norwich Lanes which is my favourite end of the city. It's in the city centre but just a little bit away from the main shopping area with all the big name shops like Next, Topshop and Primark. The streets are smaller and mostly pedestrianised with loads of quirky and interesting shops (including my favourite secondhand bookshops and charity shops which I'm always up for rummaging through).

The restaurant itself is really lovely. My favourite thing is it has loads and loads of twinkly lights which are really beautiful. The bar area looks like a tikki bar as if you were actually sat in the Caribbean. The kitchen is semi open plan meaning you can see the staff as they are cooking your food. We were seated in the area of the restaurant where they have a camper van set up as a feature with tables and stools you can sit at inside it. 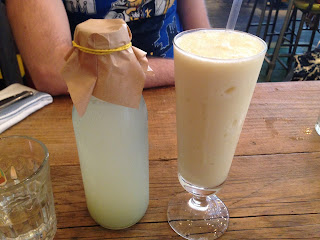 The first thing to arrive at our table was our first round of drinks. I opted for the Coconut and Pineapple punch which was delicious. My husband Hadley opted for the limeade because it was a hot day and he found it really refreshing. I do drink alcohol but often I end up driving into the city because it's such a pain to get home again afterwards and it was really nice to be offered non alcoholic drinks that weren't just your usual offerings of coke, lemonade or orange juice. Equally it was nice that they were freshly prepared drinks in much the same way their selection of cocktails were. At £3.60 a drink they aren't as cheap as a fizzy drink but they are definitely worth the extra cost when they taste this good and I certainly didn't feel left out for not being able to drink alcohol. In addition to our drinks we were given a jug of water and glasses without having to ask for them which I always think is a nice touch in a restaurant but especially in one that serves spicy food. 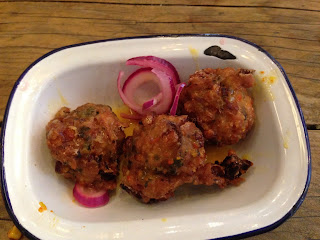 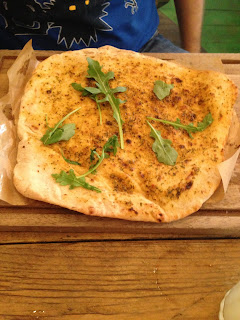 For starters we opted to share the sweetcorn fritters and the garlic flatbread. I have to confess that there were four fritters. I got excited and ate one quickly before I took the picture above.  The sweetcorn fritters are really yummy and have the same sort of consistently of onion bargees (but obviously with a sweetcorn thing going on) with a hot sauce and the flatbread is very thin which is perfect for a starter so you don't fill up on bread before your mains arrive. 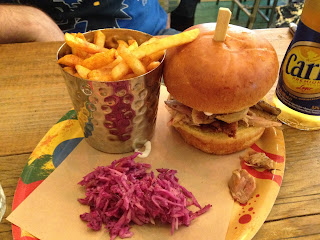 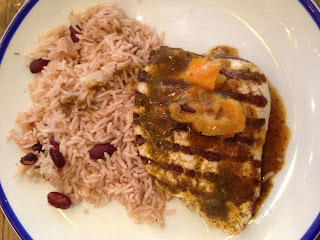 For our main I decided to have the Jerk Chicken and Hadley opted for the two way chicken burger. The Jerk Chicken was on the menu last time I visited turtle bay but is now served with coconut rice and peas and slaw rather than potatoes which I was more than happy with. I am a fussy so and so and can't abide mayo so asked for it to not even be on the plate and the staff happily obliged which I am always grateful for. I've been known in the past to fake an allergy when staff in other restaurants have been less obliging and as a fussy eater nothing puts me off a restaurant more than when something I hate is served up to me when it could easily be left off and not wasted. Hadley's two way chicken burger is  new additon to the summer menu. It consists of a breaded chicken fillet topped with pulled chicken on top with lettuce, pineapple chow and herb mayo served inside a bun. It came with slaw and spiced fries. He was thoroughly impressed with everything on his plate. 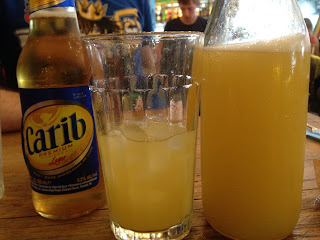 Whilst waiting on dessert we moved onto our second round of drinks. Hadley moved onto a caribbean lager called Carib whcih h enjoyed and I moved onto pineappleade another new addition to the menu. I love pineapple flavours and this was a more refreshing and lighter offering that the punch I started with which was cream based and heavier so perfect mid meal. 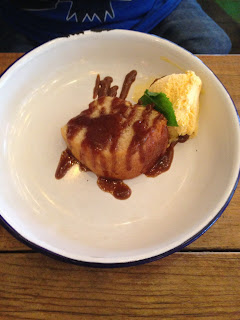 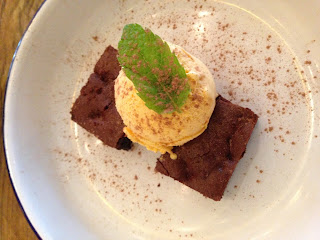 To finish off we opted to have the chocolate brownie and caymanas upside down rum cake. The brownie was a good size and was served with vanilla ice cream. It was served warm and I thought with was really tasty. Hadley isn't a huge dessert fan but really loved the rum cake which again was served with ice cream and had a strong rum taste rather just a hint of it.

I was really impressed with the staff at Turtle Bay. They were attentive and happy to help with whatever requests we had but never once did I feel like I was being hovered over or rushed through our meal to clear the table.

I must admit we are not hugely adventurous eaters as a rule, me being more than a little bit fussy at times and Hadley cautious with new things (although I'm yet to find anything he doesn't eat except bread and butter pudding) and we were both really impressed with our entire meal and the Turtle Bay experience. Everything we had was really tasty and whilst there were definitely things on the menu I wouldn't go near there's enough on the menu that I could return and not have to eat exactly the same meal again and because everything was so tasty I think I could be tempted to try some new things without worrying too much. We'll definitely be returning with friends in the not too distant future because Hadley's still sulking that he didn't take the opportunity to try the rum board.

Check out Turtle bay's summer menu here
We ate at the Norwich restaurant but the menu is available nationwide.

I received a free meal in return for an honest review. Thank you Turtle Bay for a wonderful lunch out.