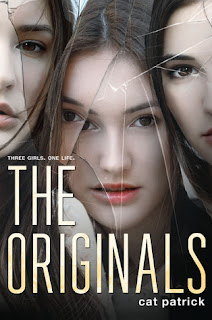 Tell us a little about your new book, The Originals.
The Originals is the story of the first human clones. They are three identical sixteen-year-old girls, and because human cloning is illegal, they hide their existence by living as one person named Elizabeth Best. The way they do that is to split their days in thirds, with one clone attending school in the morning; the second handling classes in the afternoon; and the third being in charge of afterschool commitments like their part time job, college course, and cheerleading. The system works well until two of the clones fall for two different boys, which is an issue if you’re supposed to be just one person. Like my previous two books, in addition to the teen romance aspects, The Originals offers a bit of a mystery to round out the story.

Where and when do you write?
I’m most functional in the morning, so I get up early and write until I need to pick up my twins from preschool. I also generally write on Saturdays. I work in my home office in silence, usually with a crunchy snack to keep me alert. (I read something once about how the act of chewing crunchy things can wake you up. Or maybe I dreamed it when I was asleep on my keyboard.)

If you could have a super power, what would it be and why?
I would manipulate the wind. Growing up in a windy place, strong gusts make me feel powerful and energetic. I would protect suburbia from villains, one dust devil at a time.

Where do your ideas come from for a book?
The idea store on Main Street.Or, everywhere. I spoke recently at a high school where one of the students aspired to be a professional yo-yo…uh…artist? Performer?Expert? In any event, that stuck in my brain, and maybe it’ll find its way into a character dossier at some point. I think getting inspired is often as simple as paying attention.

How long does it take to write a book?
It varies. It took me three months to write the first draft of Forgotten, but in a way, I needed to write it that quickly to keep the rules of London Lane’s forward memory straight. The book I’m working on now took me a year to finish the first draft, and it’s still not where I want it to be.

How do you get over writer’s block?
The best way to deal with writer’s block it is to focus on something else for a while, and come back to your work with a clear head. I also hear juggling works.

If you could go anywhere in the world where would it be and who would you like with you?
I’m going to cheat and say a few places—and the place dictates the people. I’d love to be on a beach with my family. In Ireland for the first time with my dad.In Paris with my French-speaking girlfriend.In London with my publicist—because I’d love to travel there and connect with readers.I love traveling; the list could go on for days.

Are you a cat person or a dog person?
I don’t have pets, but I consider myself a little of both. I realize that is extremely noncommittal, which is probably why I don’t have pets.

If you could meet Teen Cat Patrick, what advice/encouragement/secret about the future would you tell her?
Don’t be so hard on the person in the mirror. And step away from the hairspray.

Would you rather have your life narrated by Morgan Freeman in real time, or scored by John Williams?
I have serious love for Morgan Freeman, but I have to go with the John Williams score. I hear music in my head all the time anyway: It might as well be really great music.

What’s next for you?
Just Like Fate, which I co-wrote with Suzanne Young (The Program) comes out in August.  It’s about how the choices we make can change our paths in life: Suzanne and I wrote the same main character after she has to make a critical decision. Beyond that, I’m hard at work on my next novel. I hope to share more details about that one in the coming months.