Blog Tour author Guest Post: The inspiration behind No Country by Joe Brady and Patrice Aggs 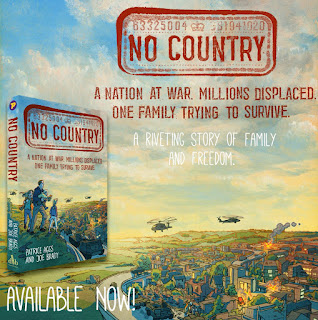 The reasons for writing No Country were the situation with refugees from Syria, the nativist reaction to it in the UK and elsewhere, and what I felt was a general empathy deficit around the whole crisis.

The stories of refugees have filled the news in the UK for years, and they are so powerfully compelling. But when looking at them from our perspective, they all have the same narrative bias: people fleeing somewhere far away to come here. In this light, even the most sympathetic news stories could be read as saying to viewers that the UK is the destination. It establishes the illusion that this is the good place, and other places are falling apart. It creates an ‘us’ and a ‘them’ with a clear hierarchy - it makes us seem better than them, more successful than them, and gives us a permission structure to feel superior to other nations, and therefore the people from those nations. It gives us the choice: let them into our home or turn them away.

How this looks aesthetically from this viewpoint, is we see people with unknown customs and food and clothes and music, coming to a place that we know. Refugees leave places that feel foreign to us, and come to a place that feels familiar to us.

From the perspective of the people fleeing violence, it’s the exact opposite. They travel from the familiar to the unknown, from home to a strange country. So, I wanted to tell a story that follows that trajectory but inverts what is familiar: a story that starts in a collapsed warring state that feels like home, and moves to a functional society that feels strange and foreign. The goal is not to be every refugee story, let alone to replace even one of them. Rather, I’d like No Country to be a bridge to what’s happening in the world.

My hope is that it will help young readers look at refugee stories in the news with a higher level of empathy. I will feel that No Country is a success if a young reader, after finishing the book, looks at a real-life story about refugees and connects with them as individuals and ‘people’ rather than ‘refugees’. It’s not about saying the ‘us’ and the ‘them’ are the same because we’re not. We’re all different people, of course we’re different. A kid from England and a kid from Syria who was forced to escape violence will have had vastly different life experiences, and our experiences and our differences shape us. But those differences don’t entitle one of us to advantages denied to the other. There’s no reason that one should have security when the other does not. I wrote No Country in the hopes of making something that will help readers consider the people coming here in a more personal and compassionate way.

Check out the rest of the tour 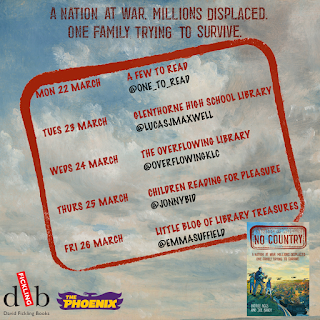