The Photographer of the Dead by Caroline Scott 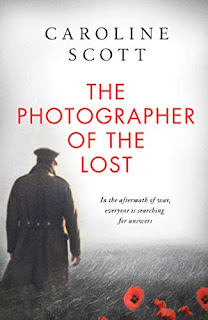 Until she knows her husband’s fate, she cannot decide her own...
An epic debut novel of forbidden love, loss, and the shattered hearts left behind in the wake of World War I

1921. Families are desperately trying to piece together the fragments of their broken lives. While many survivors of the Great War have been reunited with their loved ones, Edie’s husband Francis has not come home. He is considered ‘missing in action’, but when Edie receives a mysterious photograph taken by Francis in the post, hope flares. And so she beings to search.

Harry, Francis’s brother, fought alongside him. He too longs for Francis to be alive, so they can forgive each other for the last things they ever said. Both brothers shared a love of photography and it is that which brings Harry back to the Western Front. Hired by grieving families to photograph gravesites, as he travels through battle-scarred France gathering news for British wives and mothers, Harry also searches for evidence of his brother.

And as Harry and Edie’s paths converge, they get closer to a startling truth.

An incredibly moving account of an often-forgotten moment in history, The Photographer of the Lost tells the story of the thousands of soldiers who were lost amid the chaos and ruins, and the even greater number of men and women desperate to find them again.

I am really glad I read this book. It is thoroughly haunting and so beautifully written. It spends a lot of time considering what life was like for those left behind at the end of war and it really made me think quite deeply about those left at the end of the war, what they went through and had to come to terms with in order to just exist.

The story looks at two characters in particular the first being Harry a soldier who survived that war and now makes his money going over the battle sites to photograph sites of special interest or graves for loved ones back home. He story is such a sad one because even though he survived the war he isn't really living and spends his time feeling guilty at having survived and surrounded by constant reminders of what he went through whilst he goes about his working literally visiting sites he fought at. There was something so real and sad about his story that really touched me because his story could be any of those men who signed up for WWI not really knowing what they let themselves in for.

The other main character was Edie, Harry's sister in law who is still searching for her husband several years after the end of 1918 having never had confirmation about what really happened to her husband. Her story was so incredibly sad as she leads this life in limbo unable to move forward without knowing the truth about what has happened and resigned to a life again wandering the sites in Flanders trying to find some answers. Once again her experience so easily could have been the experience of so many other women at the time.

This books also does really justice to the World War One Battlefield sites. The way in which is talks about the sites around Ypres helps the reader really start to get a sense of their vastness but more importantly the utter devastation the experience of war left behind for the people of Belgium and France and the impact this continued to have long after armistice day. This certainly isn't something we talk enough about in the UK because most of the fighting didn't happen on our doorstep.

All in all a brilliant book which I know will stay with me for a long time to come.