Talking about books on BBC Radio Norfolk with Jack Jay

September 16, 2019
At some point in the middle of the summer holidays I was contacted on twitter by a producer at BBC Radio Norfolk asking if I'd be interested in going on the radio to chat about my book blog and I must admit I was intrigued by the idea and I agreed to go on at the start of September as a guest on The Jack Jay Show.

The first few days of September rolled round and I suddenly found the day was upon me. I booked to go in on a Monday which also happened to be my first day back at school after the six week break and after a busy first day of meetings I drove to Norwich to the Forum where the BBC is based in Norwich ready for the show.

I had no idea really what to expect from being on the radio not having anything to really compare it to but pleased to report I had the loveliest time whilst there. I was met by the series producer who chatted with me about my blog and the books I read as well as what to expect from the experience. Shortly afterwards I was taken into the recording studio. The space was divided into three rooms. Two were recording studios joined by a third room where a variety of people who work on the show sit outside getting on with their job. I spent a bit of time talking to the people in there about what was going to happen as well as advice on what to do (and not to do) whilst in the studio and after about 20 minutes I was taken through into the studio to chat live on air. 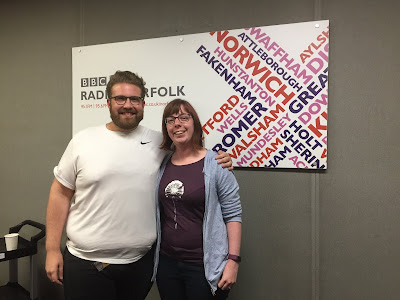 Going in that room I honestly had no idea how I'd react to the situation and whilst I knew I can happily chat about books all the day long I did wonder how it might go. Luckily for me Jack, the host of The Jack Jay Show, is one of those people who is incredibly friendly, easy to talk to and brilliant at keeping a conversation going. We chatted about my book blog and books initially but then the discussions moved on to my thoughts about book to film adaptations, Norfolk Library service, school librarians and the lack of space for reviews of YA books in traditional press. We then moved onto talking about living in Norfolk, my favourite things about Cromer, my experiences as a teacher, my experiences at UEA and the route I took into teaching.

I thoroughly enjoyed every minute of it as it whizzed by and it was fascinating to see first hand everything that goes on behind the scenes to put a radio show together. A huge thanks to the team at BBC Radio Norfolk for the experience and for being so welcoming and friendly.

If you want to have a listen to the show the episode I appeared on is available here for the next two weeks https://www.bbc.co.uk/programmes/p07kdx7x