September 04, 2018
Last week I was lucky enough to be invited along to Turtle Bay Norwich to review their new menu.

The meal my husband and I had was excellent. Both of us have recently discovered in the last month or so that we have food intolerances. He is gluten intolerant and I am lactose intolerant. As we have quickly discovered working round those while eating out has been a bit of a challenge. However we were excited to see, when looking at the menu online in advance, that there were lots of options for us. The website has a full allergens menu which specifies which allergens are in which dish along with options of how to make some dishes allergen free with a small modification which was reassuring information to have in advance of our visit. 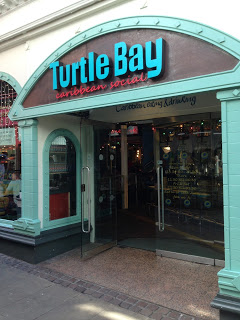 We arrived a Turtle Bay and was promptly shown to our table. We started by ordered cocktails. We arrived during happy hour (11:30 - 7pm and 9:30pm onwards Thurs to Sun and 11:30pm - 7pm and 10pm onwards Fri- Sat) which meant all cocktails were served as 241. 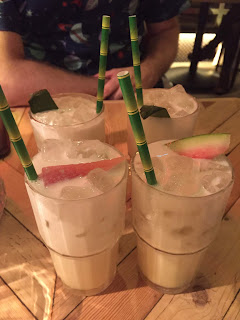 Hadley ordered Koko Koladas and I ordered the Virgin Koladas. They are basically the same drink  the only difference being that mine was non alcoholic because I had to drive. What I was particularly pleased about was that the old recipe has changed replacing the half and half with coconut milk meaning they are now vegan. In previous visits I've had and loved both and was worried I wouldn't be able to have them now that I am lactose intolerant. The fact that I could was awesome especially because they tasted just as good as the previous non vegan version. 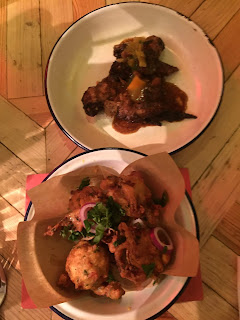 After a short wait our starters arrived. My husband had the Jerk Chicken wings which was a gluten free option on the menu. He declared them to be delicious and found that the meat just fell off the bone. I decided to have the sweetcorn fritters which were very tasty. They are obviously fried but I liked that they were not at all greasy. 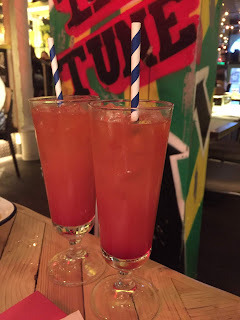 Whilst waiting for our mains to arrive we ordered more cocktails. I opted for the virgin koladas again and Hadley went for the Beachcombers Zombie which was rum and absinthe based and fruity which was a bit lighter to drink with a meal than the koladas which were creamy (not that it stopped me as I reveled in the dairy free joy). 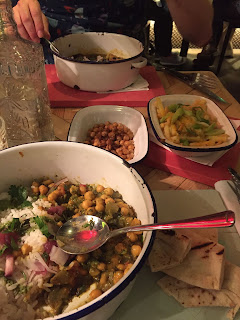 For our mains we decided to try out some of the new vegan items on the menu. We both selected a One Pot curry. They are gluten free if you don't eat the flat bread it is served with and the two we selected were vegan. I had the chickpea and callaloo curry and Hadley had the Aubergine curry. Both were very tasty indeed. Neither of us are vegan but if more places made vegan food this good I'd be inclined to order it more often. The chickpea and callaloo curry was a bit dryer and spicier than the aubergine curry. Both were served with rice and flat breads and the serving size was generous meaning I was happily full by the end of the meal which is always a sign of a good meal out for me. In addition to the curries we had sides of crispy chickpeas and dirty curry fries. I was particularly excited that the crispy chickpeas had made it onto the menu as they are really moreish. 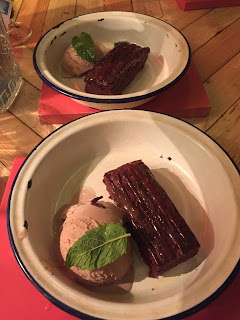 Despite being full there's always room for dessert and we finished our meal with the salted caramel brownie. We both ordered it because it was the only gluten free option and dairy free option on the menu. The most frustrating thing I have found about eating out since I have started to avoid dairy and Hadley has started avoid gluten is dessert. Regularly there are limited gluten free options and often no dairy free options. I could have wept with joy when I spotted a dairy free ice cream on the menu. Of all the food I've given up ice cream is the thing I miss the most and the chocolate ice cream served with the brownie was an absolute dream. If I hadn't have know it was dairy free I wouldn't have worked it out by the taste as it was just as delicious as other ice cream I've had. The brownie was quite light and fluffy and was also very tasty.

In short the meal we had was superb. We both loved everything we had and were delighted at the gluten free and dairy free options available to suit our food intolerances. The staff were attentive and efficient and we had a really enjoyable evening. I'll definitely be booking a table again soon.

To see the menu click here
To book a table go to this page
The link takes you to the Norwich branch but there are other branches all over the UK if you don't live locally.

We received a free meal in return for an honest review