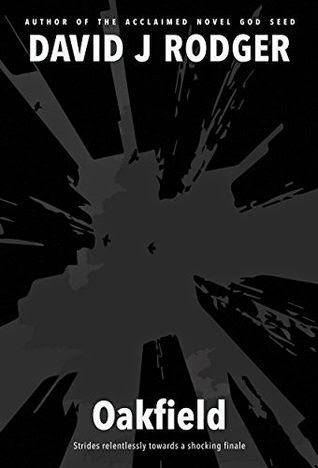 Monsters lurk in quiet places.
Annabella Spaulding has inherited an extraordinary property from her estranged grandfather. A man she hasn’t seen since she was a child. Taking her husband and family there she seeks to heal the painful rifts between them. When owners of a local mine show an unhealthy interest in the property, it becomes worryingly apparent her grandfather may not have died naturally. There is a great secret bound within the house, and digging through the clues to discover the truth they risk tearing down the walls between our reality and a monstrous other....

I stumbled upon this title totally by accident but was immediately drawn to it as it appeared to contain overt Lovecraftian influences, in that regard I certainly wasn’t disappointed.  That said I’m confident that this book would be entirely accessible to you even if you had no grounding in the works of H.P.Lovecraft (1890-1937).

Oakfield begins at a gentle pace setting the scene of an isolated West Country inheritance.   Initially things seem mildly amiss but gradually it becomes apparent that something is very wrong in the local community and the protagonists by degrees find themselves almost under siege by both locals and an intangible supernatural presence.

The pace of the book is just right, setting the scene perfectly while introducing both the characters and setting before then drawing the reader deeper into the unfolding mystery.  Towards the end of the book the escalating feeling of dread is relentless.

The cross-genre style of the book is a little unusual combining bleak sanity-shredding horror with high-octane action, almost a Tarantino/Lovecraft hybrid (and I’m guessing those two have never been previously described together).  This leads to some scenes being a little graphic in terms of violence and sexual content.

The setting of the book is perhaps unusual in that it is set in the distant future but as the geographical location is so provincial it really feels like it has a contemporary background.  Therefore on the occasion when some futuristic reference is made relating to world politics or technology it can seem a little jarring.  However this title is apparently one of a number the author has set in the same period so actually this may not prove a problem for the author’s regular readers.

My only very minor complaint was the unknown fate of a character who is led to temporary sanctuary toward the end of the book, it wasn’t really clear at the end exactly what became of that person.  If I ever have the opportunity to meet the author I shall have to ask him.
All in all though it is truly a brilliant read, the pages (in keeping with the supernatural theme) literally turned themselves.  I will most assuredly keep my eyes open for other titles by this author.

Anyone interested in the roots of this story should find a copy H.P.Lovecraft’s short story “Whisperer in the Darkness” (1931).  As I was familiar with this title there was a clear light-bulb moment when the story fell into place and I grasped more clearly exactly what was going on.